Get updates on new articles 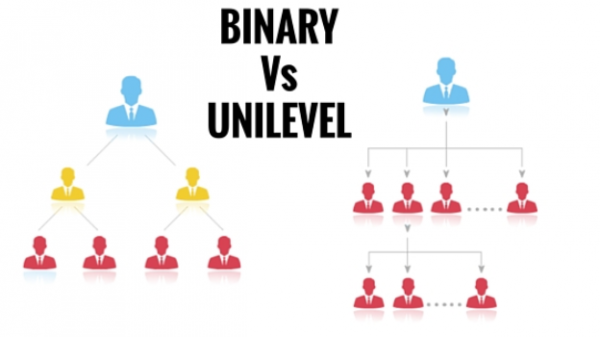 Binary vs unilevel compensation plan – which one to go for? Let us discuss the burning question in this blog.

Binary MLM Plan and Unilevel MLM plan are the two foremost compensation plans used in present-day network marketing industry. Even though two plans possess the same tag “The Pay Plan”, these business models function in an entirely distinct manner. Alike many other compensation plans these plans have their own pro’s & con’s, Strength & weakness. Anyone can make use of free MLM Software demo to compare these two plans There are variations of the task to be done in order to earn and get the highest possible commissions.

Binary Plan works on the distribution of two legs, Right leg & Left leg. Success in binary compensation plan is only achieved through teamwork and combined efforts of downlines. Because compensations are paid on group volume. In Binary MLM Plan, the compensation is usually calculated as 10% of the total business volume of the weaker leg. Ergo, It’s essential to sustain each leg equally. So, As to make benefit from the binary one must maintain an effective downline in two legs uniformly. In this plan usually you get to build one leg and your upline builds the other. So the third rep that you sponsor is placed under somebody who belongs in your downline since you cannot build a third leg. Normally the person above you or your upline ends up building a power leg for you, one after another. However, you get paid on your smaller leg alone. There are instances where you get paid on both legs from a balance point but at a lesser amount. Either way, the size of the smaller leg measures the profit you get.

Spillover marks a situation in which, After recruiting the highest allowed no.of downlines on the first level or stage, any recruiter signed after that will ‘spill over’ to the next possible level. And if the next level is also occupied, to the one following it. In binary spillover is used to occupy or increase the volume of the weaker leg. thus, Spillover is considered one of the foremost advantages of the binary compensation plan.

The advantages of Binary Compensation Plan

1. Spillover
2. Unlike other compensation plans, the Binary plan pays up to unlimited depth
3. Check match
4. Rapid Expansion of downline is possible

1. You can’t make benefit from all your downline recruits. Only from one leg
2. Very complex downline structure, which includes spillover and check matches
3. Flushing- If one leg is comparatively active and stronger than the other leg, there is a possibility for great loss of time, money and work.

Unilevel MLM Plan allows only one line of distribution. So every recruit you sponsor will fall on your forehead(i.e no spillover).

There’s no width limit on this plan and the commissions usually paid out at a specified level depth. Unilevel MLM Plans are very simplistic in structure and function. The Simplicity of this type of plan makes it simple to explain to new distributors because it lacks complicated concepts like breakaways.  In this plan, each member can recruit as many members in his downline(length). As there is no further restriction, you can build stronger and longer (length) network.  In a unilevel MLM compensation plan you build levels, you get to sponsor a lot of distributors and look for leaders within your organization. Here your first level members are the ones that you personally sponsored. When the people under this level sponsor somebody else that person is now part of your second level and the list goes on. You are paid only up to the 4th to the 8th level of your team so it is wise to place everyone you sponsor as your front liners. Avoid missing out on commissions by placing people under others you must build your levels first.

In unilevel compensation plan software, it is usually calculated as (3-8)% of the total business volume to a specified level(Generally, 5-8 levels). As with any MLM Compensation plan, a unilevel plan can be very profitable if you know the fundamentals of building an MLM business. The long-term potential of this type of plan is very rewarding for those who have made the commitment to their business and refuse to give up.

The advantages of unilevel Compensation plan

1. It’s very easy to implement unilevel, because of it’s simple and complex-free structure
2. Unilevel can be more lucrative than any other compensation plan if we recruit good leadership in the downlines
3. Faster Bonus and solid residual income

1. Unlike binary plan, Unilevel doesn’t pay up to unlimited  levels
2. No spillover or checkmatch
3. Not Much possibility of rapid downline development
4. We directly can’t increase the volume of our downline except our primary or first level.This will affect the total income unless some strong leadership is recruited in the downline.

Comparing the two, there are quite a number of contrasting features to consider. For Binary MLM plan, teamwork is essential plus building depth and getting paid more from the organization. As for the uni-level compensation plan less teamwork is done, you get rewards for your own efforts and as you progress you don’t get paid for your entire organization. In the end, it still depends on your preference, after all, you still get paid with one or the other. The right MLM compensation software with any of these plans can either make or break your business.

Actually, the structure layout is the basic difference between these two plans. While you ponder on these things include your priority lists the search for the right and suitable MLM software that would cater the needs of your business. However, there are various advantages and disadvantages for each of these plans. It’s better to try the MLM Software demo by choosing both the plans separately and then one will be able to understand the plans.

MLM Generation Plan, How it Works?

Why MLM Software Is Essential For Implementing MLM Business Plans

Benefits Of Board Plan MLM Software