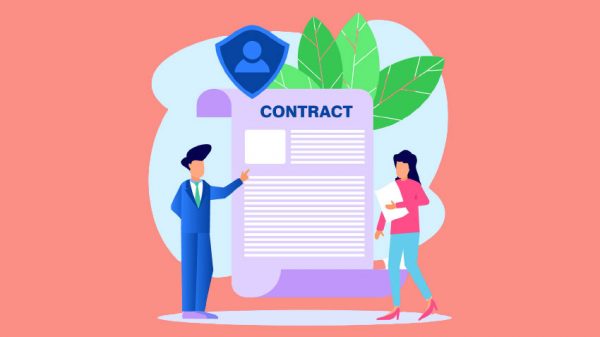 Contracts are an integral part of our daily lives. Whether you are up for a new job or getting your hands on the latest gadget, you are bound to a contract. Off late, a new kind of contract execution has been doing rounds.

Smart Contract Development is the king of contract execution that eliminates the need of third parties in ensuring the fulfillment of contractual clauses.

Let us see Smart Contract Development and the guidelines to be followed in detail.

What is a Smart Contract?

In simple words, smart contract is a virtual contract that is encoded in a blockchain network. It allows the user to perform credible transactions without third parties.  All the smart contract transactions are trackable and irreversible, making the entity all the more reliable.

In much specific lingo, smart contracts are a piece of software which store the rules by which the terms of an agreement is to be negotiated.  The software automatically verifies the fulfillment of the agreement and then executes the agreed terms.

The concept of smart contract was introduced in 1994 by Nick Szabo and gained popularity in latter half of the 21st century. The contractual clauses in a smart contract may be partially or self executing or at times be  both. The contract aims at providing superior security when compared to traditional contract systems and reduce the transaction costs associated with contract execution.

We know that much of the online crowdfunding activities are executed with the help of ICOs. The terms and conditions to be followed for investment and the criteria for the returns are coded in a blockchain and executed through smart contracts.

Interested in creating ICO tokens? Fret not and contact us for the best of Blockchain Application development Services.

Where is smart contract development employed?

The complexity of traditional contracts can be a bit overwhelming. The process involves high administrative costs, third party involvement and a lot of chaos.

The world is moving into a direction of complete digitisation. Smart contracts are the answer to cries around the world for a reliable and digital business agreement. The contractual clauses are carried out via blockchain and avoids third party systems. It allows visibility and access for all the relevant parties.

Seems tailor made for our needs, right? Well, let us see where exactly is the smart contracts utilised to the full potential.

It is a known fact that an insurance claim will take ages to process. The insurance companies often face the brunt of the claimants but they are kind of helpless, often due to admin costs, gluts and other inefficiencies.  Not anymore. With smart contracts, we can put in a system where the claim can be automatically triggered if certain events occur. Certain details is to be entered into the system by the person raising the claim or his legal guardian or partner, like the extent of damage. Once this is done and the loss is evaluated, the system generates the compensation.

The process of mortgaging is a very complex process. The lenders often employ third parties to check on the mortgagees’ income, outgoings, credit score and much more. This would often incur heavy expenses to the lender. If the lender and the mortgagee could engage in the lending process directly by enacting the terms and conditions through smart contract, then a lot of time and money can be saved, thereby unknotting the complexity in the system.

As we all know, whenever a song is used for commercial purposes, its creators get a royalty fee. There are a number of people involved in the creation of a song. As of now, there is no system in place that can specifically point out the actual owners of the song and hence, the rightful to earn the royalty fee. Smart contract ensures that the copyrights would go to the intended recipients when the ownership rights are recorded in a blockchain. How is a smart contract executed – A step by step guide

We will describe the execution of the smart contract with an illustration.

X wants to rent out his apartment in London and Y is hunting for a place to live in the same city. Following the conventional procedure, they will hire a real estate agent, a third party and entrust them to meet their needs. The agent will then have the responsibility of ensuring the compliance of the terms and in return for his services, he would charge a fee.

This might seem to be a picture perfect scenario but the catch here is that the real estate agent cannot guarantee the fulfillment of the terms.

Now, let us consider the case of smart contract, the following events would unfold.

Now the aforesaid events can lead to three scenarios.

Case 1: Y comes to the city and find the address and access code given by X are right. X receives the payment agreed upon earlier

Case 2: Y comes to the city to find the address and access codes given by X are phony. Y receives the advance rent payment he made.

Case 3: Y doesn’t come to the city. In this case, X receives some fraction of the advance rent as compensation, as per terms in the contract and rest is refunded to Y.

The contract will be termed fulfilled and will remain in the blockchain.

Ethereum is the blockchain that introduced smart contract technology to the world.

It is an open-source blockchain that has decentralised functionality. Ether is the native cryptocurrency of the platform and comes top in the market.

It’s a high-level programming language that looks a lot like JavaScript, Python, and C++. It’s designed to run on the Ethereum Virtual Machine (EVM), which is hosted on Ethereum Nodes that are connected to the blockchain.

TRON is a smart contract supported blockchain technology that is popular for its adaptability and flexibility. It is developed keeping goals to develop a robust infrastructure for decentralized transactions. It has its own cryptocurrency which is called Tronix or TRX.

TRON is a decentralised blockchain that has become very popular because of its adaptability and flexibility.

TRON is a major smart contract development platform that mainly hosts entertainment systems and visions to form a cost-effective sharing of digital content without middlemen.

Polkadot is a blockchain platform that is open-sourced and allows decentralised transactions to happen. The platform uses a proof of stake algorithm which ensures a smooth run of smart contracts. Polkadot provides easy blockchain innovation through its substrate framework, which provides its popularity.

Polkadot ensures security when interacting with other chains and when at the same time chains remain independent.

Solana is said to be the fastest blockchain that supports smart contracts with its proof of stack mechanism. Its cryptocurrency is called SOL. Solana is recognized to be faster than Ethereum and can handle around 50000 transactions per second. Solana is a low-cost and highly scalable public blockchain platform for smart contract development. As of 2021, Solana’s market cap is around $46 billion.

Tezos was founded by Arthur Breitman in 2017 and are considered one of the most secure blockchain platform. This platform is considered to be most secure because the platform supports formal verification which ensures that smart contracts will be executed exactly as intended.

Cardano is one of the top blockchain enabled platforms that support smart contracts development. It is a popular public blockchain platform with a huge market cap. Ada is a popular cryptocurrency that is developed by Cardano. The developers of Cardano focused majorly on securing and protecting billions of user data and was the first blockchain platform to be developed through peer-reviewed research. It is a highly scalable platform that can accommodate most of the global systems.

Smart contracts have many benefits that spread  across boundaries into a wide range of industries. Unnecessary costs can be reduced and a great amount of time can be saved , while not compromising the transparency of the system.

The smart contract development is seen to be much better that traditional contract implementation, at least in theory. Though chances of fraudery are not entirely zero, businesses can definitely move forward to this digital space, keeping these risks in mind and adopting necessary measures to keep such risks at bay.