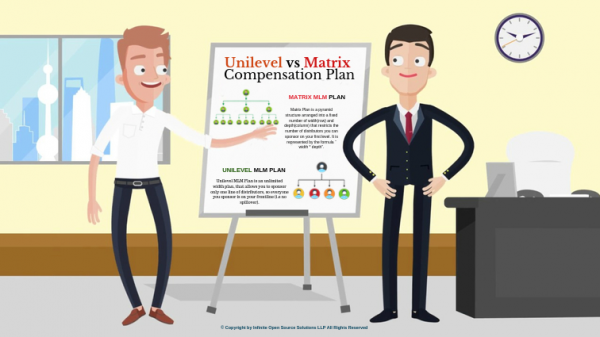 Unilevel and Matrix Compensation Plans are the two leading compensation plans that come under modern Multi-Level Marketing or MLM Strategies. Both MLM Plans help to succeed in this increasingly competitive environment.

As the name indicates, the Unilevel MLM Plan permits you to sponsor only one line of distributors, so everyone you sponsor is on your front (i.e no spillover). There’s no width limit on this plan and the commissions usually paid out at a specified level depth.

The Matrix MLM Compensation Plan is also referred to as a Forced Matrix Plan. This MLM plan is based on a compensation structure that consists of a certain width and depth. The basic structure of the Matrix compensation plan is identified by the ‘width * depth’ of the matrix.

The distinct feature of a matrix plan is its limited width. Unlike other MLM compensation plans, matrix restricts the number of distributors you can sponsor on your first level, usually to less than five. The most commonly used matrix MLM plans are 4 x 7, 5 x 7, 3 x 9 and 2×12. Like this plan, also the design of Board Matrix is a 2 x 2 Matrix that is also known as 2 x 2 Matrix Cycle Plan.

Matrix Plan is popular for its advanced ability to spillover. This is the unique feature of a matrix plan that will help you to motivate your downline distributors to sponsor more into their downline also and ultimately benefits you. 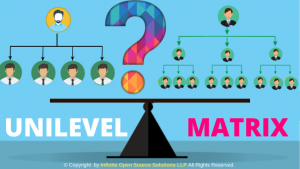 Unilevel MLM plan is known as an unlimited width plan whereas Matrix MLM plan is a forced matrix based plan.

No spillover of downlines in the uni-level plan whereas there is spillover in the Matrix plan based on width and depth parameters.

The downlines are expanded easily in the Unilevel plan as it is based on only one single frontline distribution downlines whereas the Matrix plan is limited to the width and depth of the plan.

Have a quick glance over this video for more

Benefits Of Board Plan MLM Software